Potential health effects of chloramines & treatment options for their removal 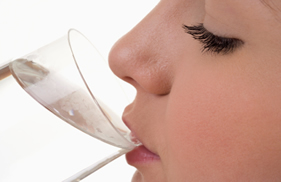 Since the implementation of chloramine disinfection by municipal water agencies, reports have surfaced regarding its efficacy and safety. Chloramines have been around since the 1930’s, but they were widely introduced at the municipal system level approximately 15 years ago due to claims that they offer better efficiency and fewer disinfection byproducts than chlorine.

The particular type of chloramine used in drinking water disinfection is monochloramine. This is mixed into water in levels that kill germs, but are still safe to drink. The U.S. Environmental Protection Agency (EPA) supports the use of chloramine disinfection.

Despite its widespread use, chloramines can produce potential health effects, which are discussed on the EPA website.

Chloramines stay in the water system longer than chlorine and can be difficult to remove — boiling, distilling and standing uncovered are not effective. Their vapors can accumulate in indoor air and concentrate in an enclosed area, such as a shower stall, bathroom, kitchen or apartment.

They also can combine with organic matter in water supplies to create iodoacids and nitrosamines, which are toxic. According to David Sedlak of the University of California, Berkeley, “Nitrosamines are the compounds that people warned you about when they told you [you] shouldn’t be eating those nitrite-cured hot dogs. They’re about a thousand times more carcinogenic than the disinfection byproducts that we’d been worried about with regular old chlorine.”

High amounts of ammonia serve as nutrients for nitrifying bacteria in the water, which can cause nitrate levels in the water to rise. Nitrate is converted to nitrite in the stomach. Nitrites can react to N-nitrosamines with proteins in fish. These compounds may be carcinogenic. Young children are especially susceptible to nitrites. Drinking nitrate-rich water is particularly dangerous for infants less than six months old, because nitrites cause blood oxygen levels to fall, leading to Blue Baby Syndrome.

Chloramines can cause leaching of lead from lead pipe, lead soldering and brass plumbing parts. This could result in lead poisoning, which can cause neurological damage, health problems and even death in young children.

Chloramines also can aggravate skin conditions such as eczema and psoriasis, and digestive disorders. They must be completely removed from water used in dialysis treatment.

Although water utilities have implemented monochloramine to meet Safe Drinking Water Act requirements, concerns have arisen about their use. According to “Managing Water in the Home: Accelerated Health Gains From Improved Water Supply,” a document published by the World Health Organization (WHO), “Chloramination … reduces the formation of free chlorine byproducts that are considered toxic, such as trihalomethanes. However, compared to free chlorine, ozone and chlorine dioxide, chloramines are relatively weak oxidants and germicides … It takes about 10 to 100 times more chloramine than free chlorine to inactivate an equivalent amount of most waterborne microbes.” WHO reported that chloramination is more difficult to dose because it requires combining controlled amounts of free chlorine and ammonia. These factors are causing some municipalities to review the efficacy of monochloramine as a disinfectant.

According to a report published in Science Daily on Nov. 24, 2015, “Cooking with chloraminated water could put potentially harmful toxins in your food, according to a new study published in Water Research. The study reveals several molecules that are almost completely new to researchers, created by cooking with chloraminated tap water and iodized table salt.” Some evidence also has pointed to the ineffectiveness of chloramine disinfection as the cause of deadly pathogens and algal blooms surfacing in some municipalities, leading some cities to revert back to chlorine.

Making national news headlines in January, residents of Flint, Mich., have struggled to maintain access to safe drinking water following the city’s disastrous attempts to switch municipal water sources. In 2014, in an attempt to save money, the city disconnected from the Detroit municipal water system in anticipation of connecting to a new water system that will use Lake Huron as its source. But because the new system was not ready, the city began using the nearby Flint River in the interim — a switch that has since been linked to heightened lead levels in residents’ bloodstreams thanks to outdated pipe and a corrosive agent in the water supply. Flint’s mayor has said the city is now facing a “man-made disaster.”

Government officials are scrambling to remedy the situation, but some consequences of the crisis may be irreversible. According to WHO, lead affects children’s brain development in significant ways, “resulting in reduced intelligence quotient (IQ), behavioral changes such as shortening attention span and increased antisocial behavior, and reduced educational attainment.”

“This is a crisis,” Michigan Gov. Rick Snyder acknowledged in January. “And that is some- thing I apologize for in terms of the state’s role in all of this.”

Some advocates – including environmental activist and spokesperson Erin Brockovich, who wrote about Flint on her Facebook page – contend that the city’s use of chloramines for disinfection led to the corrosion that caused lead leaching. Brockovich described many municipalities’ switch from chlorine to chloramines as “haphazard,” writing that, “The single most dangerous Flint River water treatment process that caused the corrosion leading to lead leaching was the use of chloramine as a disinfectant.”

The difficulties in removing chloramines from tap water have been known since municipalities began using them as disinfectants. While some consumers feel safe using tap water for drinking, cooking and bathing, many prefer to use some type of treatment. With the help of the Internet, people today are more informed about contaminants and health issues, and the problems surrounding the country’s aging infrastructure.

Many manufacturers and distributors offer catalytic-based carbon filtration cartridges and systems for chloramine removal. Catalytic carbon, because of its surface area, remains in contact with the chlorine-ammonia bond, separating the chlorine molecule from the ammonia molecule, breaking the bond and effectively removing the chemicals. Companies such as United Filters Intl. offer both granular and block catalytic carbon filter cartridges for point-of-use and point-of-entry systems. Pentair, Filtrex and Aries FilterWorks also offer similar catalytic carbon- based filtration products. Various companies offer whole-house systems with coconut shell catalytic carbon tanks to reduce chloramines. Reverse osmosis also is a widely used, effective treatment for chloramine removal. Although more expensive, the use of ultraviolet light for chlorine or chloramine removal is an established technology that is widely accepted in pharmaceutical, beverage and dialysis applications.

In conclusion, the chloramine controversy is likely to escalate in the next few years, and raise awareness of the need for research on its safety. It is, therefore, up to consumers to take necessary precautions, and water treatment manufacturers to provide solutions to protect consumers.

Article courtesy of www.wqpmag.com. Susan White is a freelance writer and marketing consultant for water treatment professionals. White can be reached at artsesusan@yahoo.com.